Last night at 9pm you could have watched “Breaking Bad” or “The VMAs”. I hope you had the “Cheadle Command” working.

I broke out the hummus and chose the VMAs, at least for the first hour and a half. Here’s what I got out of it. 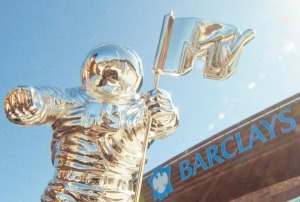 * Brooklyn is like the best you guys. Seriously. Like can you believe the show is here? Everyone suddenly grew up in Marcy last night. 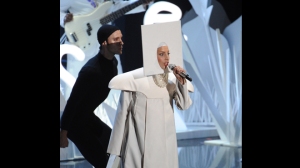 * Lady Gaga opened the show and still loves shapes. Also, it seems like she’s grown up a bit. Last night’s “Applause” performance was much more “Cabaret” then “David Lynch” like it typically is.

* Macklemore is super talented and has the real opportunity to win awards for a long, long time. Boy, did he get the most out of his acceptance speech last night though? He was like the guy who wins the Oscar for Costume Design and is just SO EXCITED SOMEONE IS LETTING HIM TALK!

* MIley, Miley, Miley. There’s a lot happening in the Miley Cyrus/Robin Thicke performance. When it first started and she emerged from the stomach of X-Men-esque Teddy Bear, tongue out, I was immediately concerned. I’ve been on the Miley train for a while, but this quickly felt like a “jump the shark” moment. Disappointed. Underwhelmed. Slightly embarrassed. But then Miley did the only thing she could to turn things around…turn up the crazy. This girl twerked it, humped a foam finger, and quickly became a “Big Pimpin’” video extra. It was glorious and the legend of Miley continues.

* If your name is Molly, you should know that you are officially a dirty word this morning.

* When they said “Justin Timberlake in the performance of a lifetime“, I had my doubts. Wow though. The guy was amazing. The N*Sync thing was great. Who doesn’t respect Justin Timberlake?

* Have you ever gone on a job interview and thought “I got this! No need to prepare because I’m charismatic and can wing it”. Such seemed the case with Kevin Hart last night. A few laugh lines, but obviously off-the-cuff and disjointed.

* The last thing I watched, was Macklemore & Ryan Lewis performing “Same Love” with the amazing Mary Lambert. It was understated and beautiful, much like the song itself, And even when Jennifer Hudson came out, it fit.

All in all, we are talking about the VMAs again this morning so…win? No regrets on spending my Sunday night like this. Wait…does that mean Miley is now “The Danger“?