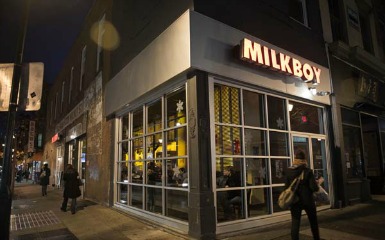 Everyone loves a birthday!

Ya know, unless it’s a girl’s birthday with limos, test tube shots, and Michael Kors bags bursting with drama. Those. Are. The. Worst.

But when bars have birthdays it’s the BEST!

Milkboy (11th and Chestnut) is turning two, and they are celebrating in a big way.

Tonight kicks off three nights of free music and cheap beer with some of the best bands in Philadelphia. Not to mention , some of the best waitresses. There’s one that’s a pixie dream girl that I swear was born in a record store. But I digress.

There’s actually a ton of music venues in this city right now. More popping up everyday. But Milkboy remains as one of the best spots in the city to drink a can of High Life and see a killer show.

To get you up to speed on a couple of the bands you can check out for the low, low price of free…

Black Landlord is a punk-funk-rock-makes-Fishbone-look-silly band that will rip open a party. And their drummer used to bring me French Dip sandwiches at Society Hill Hotel…so go see them.

I’m convinced that Shark Tape is what The Smiths would sound like if they debuted in 2013. Meanwhile The Fleeting Ends are a straight ahead indie rock pop gem that you should know.

“Keith Richards came to William Charles Lindsay in a dream. They sat down, had a coffee, and Richards told Lindsay that he thought “dance-punk” sounded like a pretty good idea. Lindsay asked Richards how he became so cool. He responded, “Make the music you want to make, make sure it isn’t shit, and people will latch on.” Lindsay woke up, called the other members of W. C. Lindsay, and told them it was time to take over.”

That’s from the “About” section of W.C. Lindsay‘s Tumblr. How do you not root for that? Just go…I’ll buy you a beer.

And if you’re there on a night that I am not, please tell record-store-born-pixie-dream-girl I said…..”Hey”.