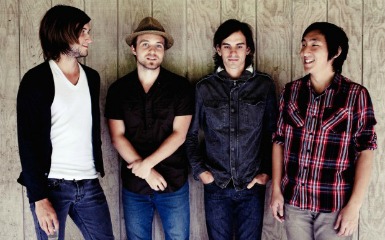 Tuesday night I crawled through a sea of black glasses and plaid shirts to the door beside the stage at Johnny Brendas. I had spent the last 20 minutes watching Chris Carrabba croon his way through a new set of songs, with a new set of people he calls “Twin Forks“.

The former Dashboard Confessional singer was small in stature, but large in presence both in the room and in the catalog of Senior Year High School memories.

All the more reason why it was odd to see Carrabba perched at the top of the cement stairs backstage while I spoke to the members of Ivan & Alyosha.

For those unfamiliar, Ivan & Alyosha are a band from Seattle who gained a lot of buzz at SXSW a few years back. They recaptured that earlier this year with their first full length “All The Times We Had“. They deserve it too. Tight solid pop songs that sound like wood-panel station wagons and 60’s goodness.

It’s a fun listen, and it brought them to Philadelphia this week with Twin Forks and The Lone Bellow. I had a chance to talk with them before their set.