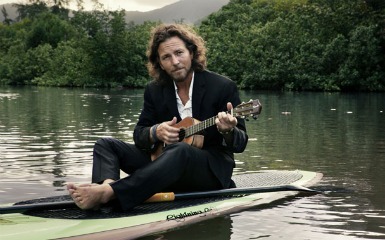 I’ve spent the past day listening to Eddie Vedder’s “Ukulele Songs“. I like to think that somewhere out there Raul Ibanez is doing the same thing. And maybe, just maybe the two of us could share a Fivel “Somewhere Out There” moment while listening.

That aside, I should probably start from the beginning. Although, it’s not a crazy concept to breakdown and understand. “Ukulele Songs” is a collection of stripped down originals and covers played by Mr. Vedder on….wait for it…wait for it…there you go.

When I first heard “Longing To Belong” about a month ago I fell in love. I had extremely high hopes. It touched me in a way I wasn’t expecting. Similar to what Untitled from Yield did over a decade ago. It was raw emotional Vedder which is when he’s at his best.

I’m not sure what I expected once the album finally arrived yesterday. It’s certainly songs that are played on a Ukulele. They certainly are raw. Most of them touching in the same way as the single. But something is off about this.

I think it’s that it’s 16 helpings of the same thing. “Just Breathe” stood out on Backspacer because it was different. Maybe I’m conflicted because it’s rainy day music not meant to be enjoyed when it’s 1,465 degrees outside, but I think it’s probably deeper than that.

Songs like these are special and have a place. They are album closers or the calm before a storm of rock. If The Beatles released 16 tracks of “A Day In The Life” it would be the most boring epic of all time.

This is not a review. This isn’t even an endorsement. This is just me trying to wrap my head around an album. When I’m conflicted like that I find it best to put pen to paper….or…finger to key, and see if it clears things up. It didn’t yet but I’ll let you know how it goes.

I really do want to love this album, I just wish it would invite some friends over that look a little different. Diversify the party.

All that being said, enjoy this selection from “Ukulele Songs”. It’s the best rendition of “Dream A Little Dream” since Miss Piggy performed it in Muppet Vision 3-D.

Also…if you would like to see it live at The Tower Theatre, sell your kidney and buy tickets HERE.