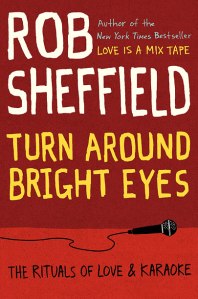 We all recover from tragedy in very different ways. Some find faith, others find friends, and some…some…find karaoke.

Rob Sheffield of Rolling Stone did just that.

Sixteen years ago, Rob Sheffield had everything going for him. He was young, ambitious, working as a music critic in Charlottesville, Va., and married to the woman he thought he’d spend the rest of his life with.

All that changed suddenly when his wife died of a pulmonary embolism. Sheffield was a widow and not yet 30 years old.

There were many factors that helped him dig himself out of the deep depression that followed: moving to a new city, the simple passage of time. But the most unexpected antidote for his grief came in the form of karaoke.

Sheffield discusses his experiences in the new book “Turn Around Bright Eyes: The Rituals Of Love And Karaoke“.

Being a karaoke enthusiast (ask the folks at Adobe Café what’s up), and a fan of Rob’s work in Rolling Stone since high school, I was very excited to dig in and talk with him this morning.