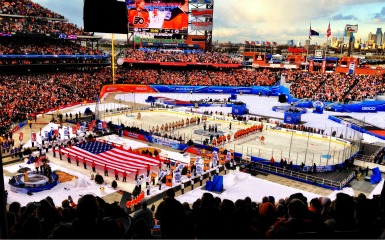 I mean, we haven’t fared well in the past couple of Fall Classics. Nobody really cares about the Midsummer Classic. And now, the Winter Classic has come and gone leaving most with a chilly empty feeling. Let me go on record as saying that although unsure of what the “Spring Classic” would actually be, I know that I don’t like our chances.

Yesterday the NHL helped “Flyer Up” Philadelphia with the Winter Classic being held in all its outdoor glory at Citizen’s Bank Park. Regardless of the outcome, it was quite an event and one that you will be told “Yeah I was there” for countless years to come in bars across the city.

I’m sure I’m not the only one that normally sits out this part of the season, but the Classic raised the profile of both the Flyers and the city to levels that you can not ignore. I won’t bore you with pretending to know what this game means in the rivalry, or if the ice conditions played a role, or how to spell Sergei Bobrovsky. But I will share with you the 5 things that I noted during the game.

1. The Roots performed before the puck dropped. As you may know by now The Roots are on speed dial for events in this city. 4th Of July…On it! Winter Classic…On It! Olivia Nutter having a birthday party…On it! While quietly Hall and Oates watch from the cheaper seats.

2. The same usually rings true for the National Anthem. Patti Labelle is in the chamber, unless there is a scheduling conflict, then Justin Guarini or the girl who won America’s Got Talent is ready to go.

3. While on the subject of anthems, am I the only one that sees the problem with booing Canada and chanting USA? I believe the Flyers only have two players from the U.S., 3 if you count Alaska (but who does?)

4.  It was great seeing Eric Lindros and Ron Hextall honored during the first intermission. Nothing snarky, just cool.

5. Even with snow on the field, being in Citizen’s Bank Park makes me miss baseball. At the risk of shattering arms maybe we should consider a Baseball Winter Classic. Ok, it doesn’t even have to be a game, I would watch Chase Utley make snow angels.

5 1/2. Oh yeah, and there was a hockey game too. A pretty good one for that matter. Very excited to watch how HBO breaks it down. See you in Spring Training.