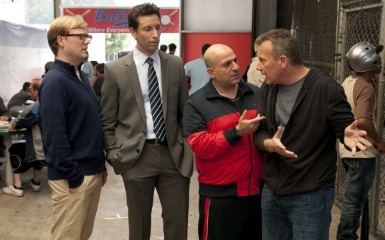 Tell the realtor to stop his search in Canada. The most important cancellation of the day is Donald Trump‘s run for President. That gust of wind this afternoon was the collective sigh of relieve from America. Burn!

Unfortunately for some of you that is the silver lining on the dark day for some of your favorite shows. Some you had to see coming. The Paul Reiser Show was really a poor man’s version of The Larry David Show, which even though it’s great, is a poor man’s version of Seinfeld. It’s like that thing where you tape over a tape so many times that all the quality is lost.

Others seemed doomed from the start. S@#! My Dad Says can’t even say the real name of the show on TV. Who would have guessed that a Twitter feed wouldn’t pan out for a full series? I guess this makes the future bleak for my @ChaseUtleysDog pilot in development.

And finally there is Friday Night Lights, which feels like it has been cancelled 17 times now. Coming soon to VS. or Spike or another network soon I’m sure.

So when the dust settled did your show get cut. Ahh…find out here in one easy to use list provided by the fine folks at TV Squad.